Not every DIY project is as executable as, say, making a potato gun. Occasionally, we observe a quixotic project that is just plain wonderful. Consider rich guy Philip Anschutz and his eponymous Anschutz Entertainment Group (AEG). His ambition to bring an NFL team to Los Angeles is a Fitzcarraldo-sized DIY project that, if the stars align, might happen in time for the 2016 season. 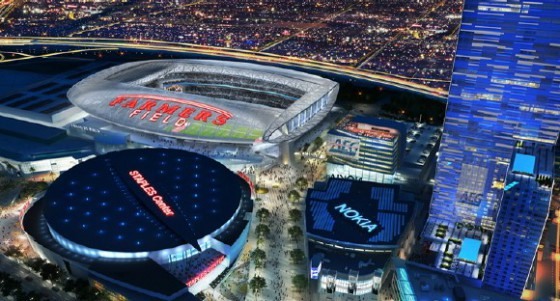 And for those of us who live in Los Angeles, praise the lord for any rich guy who can bring an NFL team back to the City of Angels...

1. IDENTIFY AN ECONOMIC ANOMALY IN THE MARKET

The NFL is the singular piece of television programming that is actually growing, despite the continued fragmentation of television and the media. Network sitcom viewership, way down.  Network dramas, way down. NFL, way up. Defying gravity. The teams have gotten ferociously more disciplined, and it certainly helps that football on hi-definition arguably looks better than anything else on earth. The sport superbly fits the technology of the 21st century. Not having a team in Los Angeles is a gigantic lost opportunity—for the viewers, for the NFL, and for the team that might move here.

1994 was the last year that the LA Rams and, coincidentally, the LA Raiders, belonged to the city of Los Angeles. For 17 years, the second biggest DMA in the United States has been without a team, in the American sport juggernaut. A market opportunity the likes of which rarely happens. Many businessmen, such as ex CAA partner, Michael Ovitz, have tried and failed. But this time around, it might just happen.

2. BONE UP ON THE PSYCHOLOGY OF THIS NON-PROFIT

Suck up to Roger Goodell, the NFL, and its socialist financial model. The NFL parent company happens to be a non-profit, 501(c)6 designation, and as such is unique. 32 teams throw into one pot—all television and radio revenue, all road game ticket revenue, all NFL Properties income from merchandising. What an individual team gets to retain is home game ticket revenue, private box income, parking and concessions. That means that more than 80% of all revenues are thrown into one precious pot and divided up pretty much equally among the 32 teams. It is ingenious, and that way, no single team in some tiny market can suffer financially or competitively. No other league has any such all-for-one, one-for-all approach towards revenue. AEG's job is to convince the NFL that the new plan will benefit the socialistic structure of this league. Shifting one of the existing 32 franchises to Los Angeles must add value to the common coffer.

In order to persuade the league, AEG must argue that a Los Angeles team will benefit all 32 owners. NFL owners are forced to analyze the aggregate bottom line. Case in point: in the current NFL Lockout, which is showing no signs of ending anytime between at least now and late August, the two sides were about $300 million apart on the owners' last offer. This sounds like a lot of money until it is noted that a) $300 million is only 3% of the NFL's $9 billion in total revenue, and b) this sum accounts for just under $10 million per franchise per season. After additional legal fees and unquantifiable damage to the NFL brand as fans become increasingly disgusted that billionaires are battling millionaires, it becomes clear the NFL league and owners are incentivized to stay in formation, even for marginal profits.

4. MAKE NO MISTAKE—IT'S THE STADIUM, STUPID

This broader point brings us to franchise valuation. According to the latest Forbes list, the range in franchise valuation is quite wide: the Dallas Cowboys are first at $1.8 billion, while the Jacksonville Jaguars pull up the rear, valued at "just" $725 million. Nine of the top 11 valued franchises had stadiums open in the last decade. The only two exceptions are the Baltimore Ravens, whose stadium opened in 1998; and the Washington Redskins, who inexplicably continue to print money, despite Daniel Snyder's megalomaniacal mismanagement. Therefore, of the top 11 franchises, no stadium is more than 15 years old. New stadiums, more than any other individual signal, influence franchise valuation.

5. LOCATE A WOUNDED FRANCHISE, USING KARMA AS A GUIDE

A cursory glance at the aforementioned Forbes valuation list yields four teams for whom a move to Los Angeles would make financial sense: the San Diego Chargers (ranked 24th at $907 million), the Minnesota Vikings (ranked 30th at $774 million), the Oakland Raiders (ranked 31st at $758 million), and the Jacksonville Jaguars (ranked 32nd at $725 million).

Build a stadium with the appearance of private funding. Historically, tax money has often paid for football stadiums. But post-recession thinking, coupled with genuinely bankrupt municipalities, means the days of taxpayer funded stadiums....are difficult. The cost of the land and building the stadium in downtown Los Angeles is estimated to be $1 billion. Even though AEG probably could (coupled with $700 million of sponsorship money over thirty years from Farmers Insurance), finance a new stadium entirely on its own, why should it? This is, after all, America, where private enterprise, wealthy individuals, and corporations are inured to public funding if the cause happens to be for-profit stadium projects. It would be a grave injustice for AEG to have to bear the true cost of this project as this would lower its ROI. If this were to happen, it might perversely explain why the United States is losing to China. The days of carte blanche public funding for stadiums appear to have ended around 2008.

AEG would almost certainly be unsuccessful in seeking obvious public funding via an increase in taxes or decrease in other government expenditures (California has enough issues on its own in those regards) but would have to do it in a manner such that the general public does not realize the extent to which it is subsidizing private billionaires. Here, AEG would be wise to follow the Yankee Stadium model of using municipal bonds to borrow at the rate of city government without having to pay taxes on the financing. It appears AEG has even attempted to get the city to pay for a substantial portion of the project itself, asking LA to issue $350 million in pubic bonds, while concurrently stating that it is "unable" to act as guarantor on this debt. (OPM means Other People's Money for the acronym impaired.)

7. IMPOSE A TAX ON THE EXISTING TEAM OWNER

Anschutz is one of the very few individuals who has the resources and knowledge to build a stadium. That is a fact. Building a stadium smack in the middle of downtown Los Angeles is simply a nutty DIY project. So, he will likely use his swagger accordingly. It is expected that as a "tax", for arranging all of this, Anschutz/AEG will be able to exact equity in the neighborhood of 10% to 50%. Since the added value is in building the stadium, why not build the stadium and tax some NFL owner, rather than inherit the political and monetary headache of buying an entire team AND building a stadium?

Traffic in Los Angeles is bad. Perhaps reason enough for a rational human being to oppose the stadium. With a remarkable attention to detail, AEG anticipated this objection when presenting to the world the plans for Farmers Field. AEG paid to have a helicopter hovering over the site at downtown Los Angeles, videotaping five non-stop hours of Sunday 10am to 3pm traffic—all to demonstrate that Sunday football games at Farmers Field would not cause traffic jams since there is very little traffic on Sunday morning. Ingenious. Perhaps if the game is Sunday, morning traffic might be manageable. A Sunday night, less promising. A Monday night game, for those occasional Monday Night Football events, watch out. Oooo, and nobody seemed to mention the dozens of weekday evening rock concerts any stadium owner will want to schedule.

Psshaw. In truth, who are we worry over details? We mortals are grateful that this rich guy has taken on this DIY project.          @rgspiegel

What an extensive piece. It is truly strange Los Angeles does not have a team. Interesting how downtown LA might evolve culturally/residentially.... already such a disjointed area. There is the Staples Center, the struggle for an art scene/Chinatown, Little Tokyo, FIDM. This would add another odd element. Or perhaps combined with the staples center, sports mania would overtake the area.

R Mansur, I don't think you have an evolved perspective on the ways in which DTLA has evolved.

Despite #8's enticing claim that games would only be on Sunday to reduce traffic congestion, I have my doubts that Sunday would be the only event day. Maybe, but the Staples Center already creates enough jams on the highways during sporting events, and if they go on simultaneously with the football stadium, that would create potential jams. I think I'm just disgruntled over Obama's visit to L.A. today. Bringing up nightmares of being stuck in my car all evening.

Monday night football would be death. i wouldn't venture from my house those days.

The idea is so counter intuitive. I cannot think of another stadium that is so in the middle of a congested city. Also, Anschutz is so heavily invested in the city of Los Angeles....which is remarkable since he lives out of state. Although a financial undertaking, this undertaking is more like art.

No matter which team moves to LA they probably won't dethrone my beloved USC Trojans as LA's football team. I'm obviously biased, but it's true. USC already has 96,000 fans (more than Farmer's Field will hold) paying NFL ticket prices to attend each of their games in the fall. LA Memorial Coliseum is only blocks from where Farmer's Field will be. With that in place, are there enough hardcore unserved football fans in LA to support another team? There weren't for the Rams or Raiders, and I worry that whatever team AEG purchases / attracts (I agree, Jaguars make the most sense) will have the same problem. I would love if it worked out though, and LA has to be a better place for the Jaguars than Jacksonville is right now.

Great article! I'm interesting in seeing how the eventual CBA affects the outlook of getting a team to LA. On #4, I'd also be interested in seeing a breakdown of what you think are the top influences of franchise valuation. If I had to guess off the top of my head, I'd pick wins. Out of the four teams that are most likely to move to LA, Jaguars, Chargers, and Vikings have never won a Superbowl and the Raiders moved to LA and back to Oakland since the last time they won. Is there any chance LA doesn't get an NFL franchise in the near future?

Well...This project needs to be consummated. As soon as the ink is dry on a deal, have not franchises will be angling to move to LA. Although logic would dictate that AEG should either bear full responsibility for the costs of this project, including demolition of the convention center, or have to share equity in the stadium with Los Angeles, AEG will almost certainly hold out for the best deal. Here, they should present "unbiased" studies that show income multiplier effects on the surrounding area and, by extension, city tax revenue.