An article in Friday's Wallstreet Journal examines a model for success that can't be ignored: the world is just goo-goo for Lady Gaga. 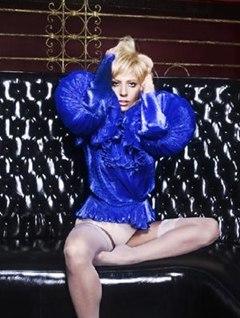 "Her debut album has generated four No. 1 songs. She topped the digital sales chart for 2009 with 15.3 million tracks sold. Her dance hits, including 'Poker Face' and 'Paparazzi,' recalibrated the sound of pop radio with a spacey Euro vibe that's crept into songs by rock and rap artists.

She grabbed attention beyond the music world with outfits that make her look like a refugee from a sci-fi film. In concert, on video and at past awards shows she has sported full facial masks, worn planetary rings around her head, and framed her face in what looked like a bird's nest..."

John Jurgensen breaks down Gaga's success, and what sets her apart from the rest of the music industry.

Check it out, it's an interesting read.

if you want follow the road of succes these days ... well acting like a person with severe handicap will sure get you into the spotlights + a bit of advertising